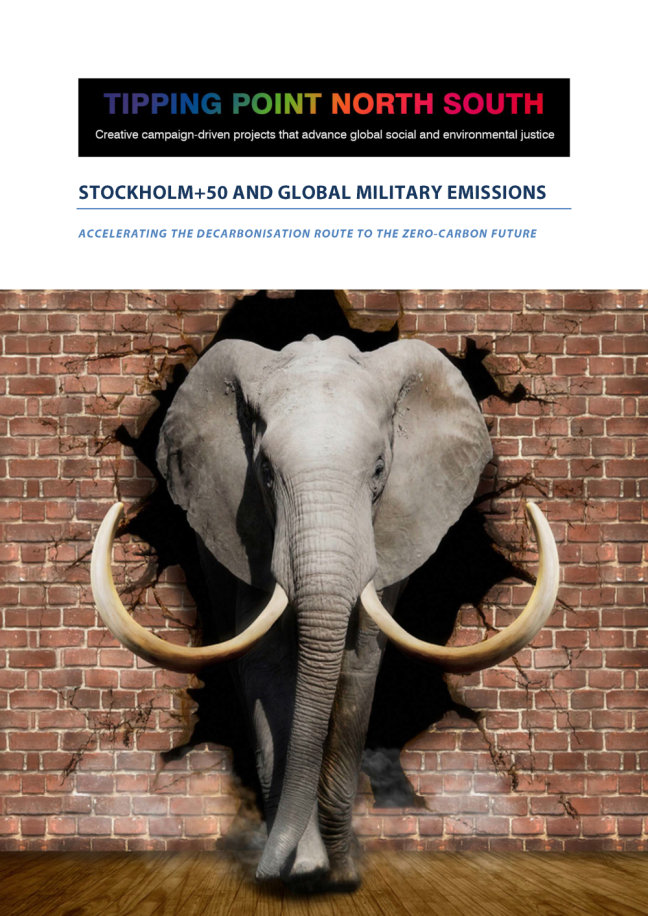 To mark the UN gathering Stockholm+50, Transform Defence has published its briefing Stockholm+50 and Global Military Emissions: Ideas for Discussion. We are honoured to have the foreword written by Professor Saleemul Huq , Chair of the Expert Advisory Panel for the Climate Vulnerable Forum.

Global military emissions elude mention, let alone inclusion, in formal debates on climate change.  Happily, research on the issue is now starting to attract civil society and media attention. Glasgow’s COP26 proved very much a launching pad for this, including our work.

The briefing makes the case that military emissions – enabled by runaway military spending – are interlinked with so many topics on the agenda of Stockholm+50 which aims to ‘act as a springboard accelerate the implementation of the UN Decade of Action to deliver the Sustainable Development Goals, including the 2030 Agenda, Paris Agreement on climate change’.

The briefing offers up a number of practical ‘ideas for discussion’ and calls are drawn from previous Transform Defence reports: The Global Military & the UN; Indefensible; Global Military Spending & Value for Money.

A new TPNS/Transform Defence commissioned report by Perspectives Climate Group on military emissions and UNFCCC reporting is due out later in June 2022 and will offer up detailed and practical guidance on how civil society and countries alike can push this topic up the climate agenda.

The Stockholm briefing can be viewed and downloaded here: https://transformdefence.org/publication/stockholm50-and-global-military-emissions/

One thought on “Stockholm+50 and Global Military Emissions: Ideas for Discussion”

What we urgently need now is a rethinking of the entire concept of security. Even after the end of the Cold War, it has been envisioned mostly in military terms. Over the past few years, all we’ve been hearing is talk about weapons, missiles and airstrikes… The overriding goal must be human security: providing food, … END_OF_DOCUMENT_TOKEN_TO_BE_REPLACED