The Global Military and the United Nations

Download full report: ‘Reset for the 21st century’: The Global Military and the United Nations [PDF]

It launched with the publication of two reports: Indefensible: The true cost of the global military to our climate and human security and Global Military Spending, Sustainable Human Safety and Value for Money.[1]

The terrible combined human impact of conflict and climate change on many millions of people in the global south, inevitably meant this work would lead to questions about how all this impacts on the activity and role of the United Nations (UN).

This briefing pulls together the various ways in which the global military as whole – and primarily the top 20 spenders and arms sellers – impact on the SDGs and on climate change.

In the light of the UN Secretary General’s call to launch a reset for the 21st century, its recommendations suggest ways to explore a reset in relation to this much overlooked issue and in turn raise ever greater awareness, debate and action.

For the international community to

In the face of immediate and combined human safety threats from climate emergency, pandemic, mass species extinction, conflict, poverty and inequality and the low level of funds allocated to address these clear and present threats, we need more and urgent evidence-based assessments of global military spending and its relevance to sustainable human safety over the coming decades.

For example, the $2 trillion lifetime cost of the F-35 weapon programme could fund any one of the following:[3]

We have just 10 years to go before the end of 2015-2030 SDGs cycle. The world’s estimated financial needs for achieving the SDGs are between $5 and $7 trillion a year. Having found approximately $3 trillion so far, an extra $2-4 trillion a year is still yet to be found.[4] There is no question that on grounds of morality as well as security, diverting significant sums from defence budgets to help fill these outstanding SDG commitments is a totally sensible call.

3.    Create a new UNFCCC TOPIC and fill the knowledge Gap on military carbon bootprint across UN and national processes

We have collectively and consistently ignored the massive yet unaccounted for historic and present-day responsibility of the world’s militaries for climate change, from their day-to-day operational activities to the wars and conflicts of which they are part (and post-conflict carbon burden of reconstruction).

While some nations are aware that the climate change imperative impacts on their military, the solutions on offer are far from adequate.

In fact, it is a deliberate choice on the part of those nations, which comprise the world’s top military spenders, that the formulation of urgent international treaties on climate change faces one great omission: the problem of the gaping data hole (and hence by extension a serious knowledge gap) concerning the global military carbon bootprint and associated environmental and societal impacts. Citing ‘national security’ as a reason, only a few countries submitted limited and inadequate data on military emissions to the UNFCCC in their annual GHG emissions inventories.[5] The military/defence sector has also been excluded from any IPCC assessment so far, and as a consequence, there has been minimal public debate on the military/defence sector in our march towards a net-zero world.

To address all these we need the following set of actions, illustrated in the flow chart below: 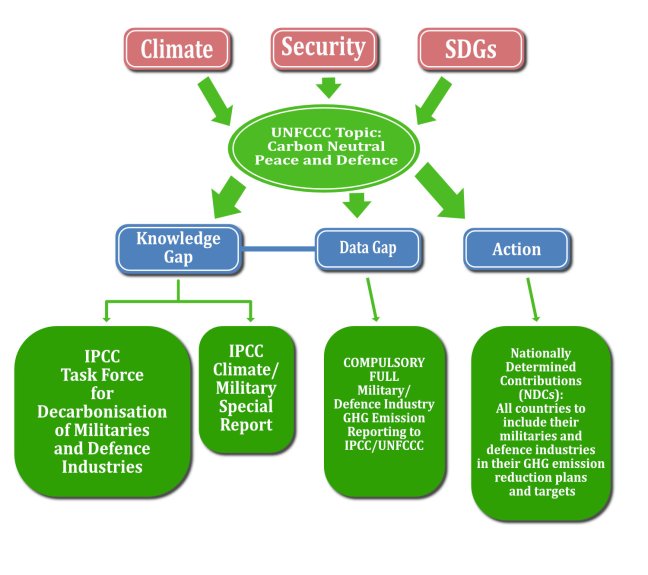 Power: Runway military spending is as every bit as central to understanding power, poverty, economic crises and unjust distribution of resources as other structural issues (and civil society campaigns) such as debt, trade, tax, climate change.

Hypocrisy: The P5 nations to be called out on this. Approximately 80% of global arms sales are made by the Permanent 5 members of the security council (USA, UK, Russia, China, France) plus Germany[6] – the same nations charged with keeping the peace of the world. All this while the majority of their arms sales go to the global south.

Waste: Many of the world’s poorest countries and fastest growing economies (both measured in terms of GDP per capita) spend much more on their military than either on education or on health; excessive military spending impedes economic development (SDG 8) and significantly impacts on the efforts to reducing poverty (SDG 1) and hunger (SDG 2) and improving health (SDG 3) and education (SDG 4).

We have to upend the risk pyramid, redefine defence and repurpose military spending. Climate change and global health, inequality/poverty reduction and conflict prevention are hard defence issues and in turn, runaway military spending and war/conflict are major contributors to the creation of these conditions in the first place.

We must end the ‘Cinderella’ status for these extreme threats to our collective human safety, transform defence for sustainable human safety and place carbon neutral peace and defence at the heart of it.

Tipping Point North South (TPNS) is a London based non-profit co-founded in 2009 by former senior debt, trade, tax and climate campaigners. TPNS has co-produced a number of cinema documentaries and high-profile campaign events while developing a number of single issue campaigns in tandem.  Transform Defence is now its priority policy/advocacy project.

Transform Defence for Sustainable Human Safety works is TPNS’s main advocacy project and works to put sustainable human safety at the heart of 21st century foreign, defence, security and international development policy-making. We must question the limits and deficiencies of 20th century national self-interest if we are to address the greatest threat to our collective survival – runaway climate change. Transform Defence describes the paradigm shift we will need to meet this monumental challenge.