Global military spending as it relates to the African continent

Currently 60% of global arms sales go to developing nations from a handful of rich nations. China is also now expanding arms sales to the continent, such as recent $8bn Sh arms purchase from Kenya in 2015.

African governments and rebel groups imported 45% more weapons in 2014 than in 2005, according to Sipri. ‘Violence and destruction associated with rising arms imports into Africa costs the continent an estimated $18bn (£12.1bn) a year as infrastructure is destroyed, businesses are closed and children are kept out of school, said Martin Butcher, arms policy adviser at Oxfam. “Burundi spends an average of $5 a year on healthcare for each citizen, but the cost of treating a victim of armed violence in Burundi averages $165 a year,”(Guardian 20.3.15)#

While all efforts must be made to work on conflict prevention; on support for communities and societies experiencing conflict or full blown war; on post conflict resolution – the role that military spending plays, whether in a national or international context, must also be factored into such work and addressed by all those whose work addresses the causes, the means and the consequences of ever rising military spending.

In relation to the African continent, below is a snapshot in visuals and further reading conveying why this matters. The arms trade treaty– an effort to monitor arms sales – does not address this bigger picture context.  In the way that debt cancellation, trade justice, tax justice and climate justice campaigns all addressed underlying structural, geopolitical issues that frame the power relationship between the global north and the global south, so military spending is also a lens through which to understand this relationship and the disastrous human and economic and consequences that flow from it.

France’s military is all over Africa 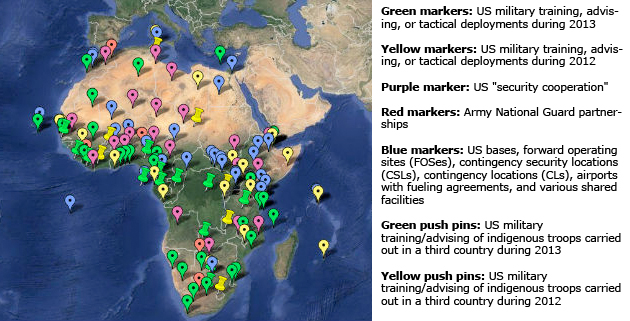 The Startling Size of US Military Operations in Africa

Why Is The United States In Africa? | AJ+

According to a 2018 briefing by AFRICOM science adviser Peter E. Teil, the military’s constellation of bases includes 34 sites scattered across the continent, with high concentrations in the north and west as well as the Horn of Africa. These regions, not surprisingly, have also seen numerous U.S. drone attacks and low-profile commando raids in recent years.

Trump’s Africa strategy should have cast China as a regional partner, not a global adversary
by John J Stremlau
https://theconversation.com/trumps-africa-strategy-should-have-cast-china-as-a-regional-partner-not-a-global-adversary-108901